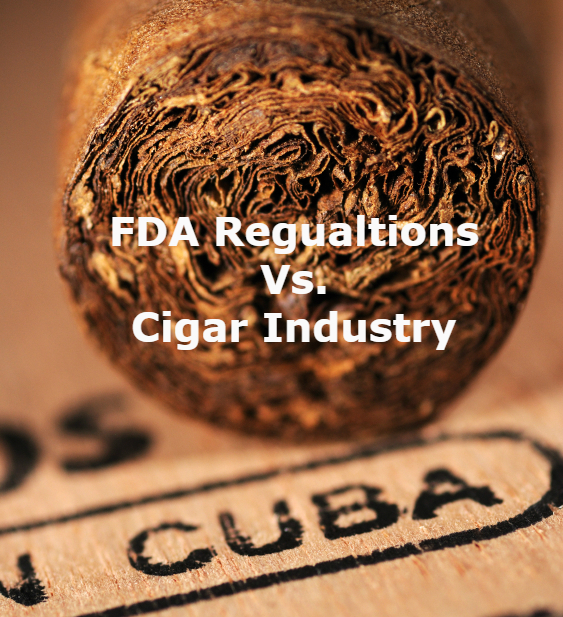 On one hand the Obama administration looks like it’s about to give Cuba a decent shot at the world’s biggest market for premium cigars.

Meanwhile, the other hand, in the form of what some are calling an overreaching FDA, is simultaneously cracking down on tobacco products and new regulations could force hundreds of cigar brands off the shelf and keep Cuban cigars out of the US long after the embargo is lifted. Smaller boutique cigar companies, not just Cuban cigar manufacturers, are especially worried new FDA regulations could cripple their business. With estimated costs, to have each cigar approved over USD 100,000 and up to two years of waiting before even getting approved.

Another controversial and potentially damaging regulations call for all cigar boxes to carry strong warning labels, similar to those found on cigarette packages, that will need to cover at least a third of the box. It also sets a predicate date of February 15, 2007, so any tobacco products (including cigars and e-cigarettes) introduced after that time will be subject to lengthy and costly testing before the FDA will approve it for sale in the US. In an 11th-hour attempt to put a halt to the new FDA regulations, which have been slated to take effect on August 8th, 2016, in early July members of the cigar industry joined forces to file suit against the FDA to avoid having to comply to the new tobacco regulations, which were designed to regulate new tobacco products such as e-cigarettes.


The three major cigar lobbies, the Cigar Association of America (CAA), The Cigar Rights of America (CRA) and International Premium Cigar and Pipe Retailers Association (IPCPR), filed suit to change the recent “Deeming Rule” in order to exclude imported premium handmade cigars. Lawsuits were also filed by Frank Herrera on behalf of Global Premium Cigars LLC and Enrique Fernando Sanchez Icaza (makers of the brand 1502 cigars) and several cigar companies, including Leaf by Oscar and Falto Cigars also support the class-action lawsuit. They argue that cigars, which unlike cigarettes are not produced with chemicals, have not been specifically studied extensively and proven to have the same negative effects on health as cigarettes and that the two tobacco products are fundamentally different.

Health warnings on cigar boxes, therefore, are not based on solid research so requiring such labeling is overreaching and an infringement of the First Amendment that protects free speech.

The FDA has asked that all new tobacco or tobacco-derived products introduced after February 15, 2007, including cigars, must establish “substantial equivalence” to a product sold before the predicate date to be able to sidestep a complicated and very expensive FDA pre-approval process to bring the product to market in the US. Global Premium Cigars believe that the 2007 predicate date violates substantive due process, which is protected under the Fifth Amendment, as well as the Small Business Act.