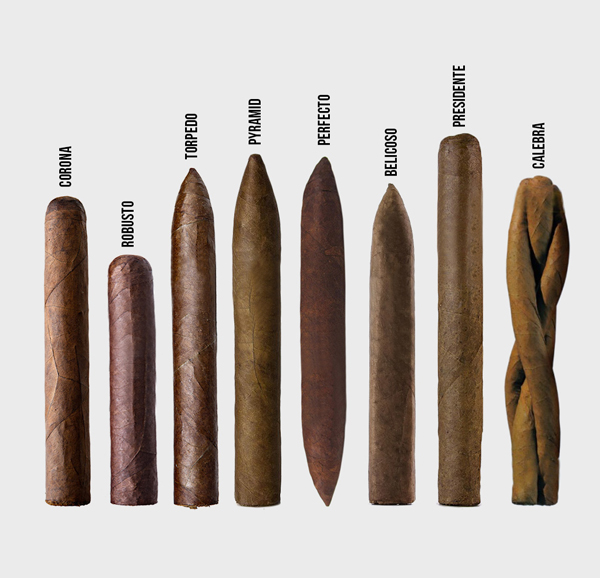 The Cigar Terms page is an easy to use reference tool for the many cigar terms out there. Learn about the many different terms in the world of cigars. Also find cigar taste terms and many other cigar definitions.

Aging
A period of time during which the cigars are put to rest in a humidity controlled environment, typically in a humidor or storage areas, called “aging rooms.” This is where they’ll be undisturbed and allowed to evolve and mature. Some cigar aficionados feel that aging cigars for a significant period of time is essential to developing the best characters and flavors of a cigar.

Ash
Evaluation of the color and structure of a cigar’s ash is and important part of the cigar-evaluation process. The whiter the ash, the better the soil in which the tobacco was grown, and a long, evenly formed ash is a sign of a well-constructed cigar.

Bulk
A pile of tobacco leaves left to generate heat (known as “sweating”).

Binder
The tobacco leaf that holds the filler of the cigar together. Chosen for its durability, the binder is normally a coarse leaf that is often found on the upper part of the tobacco plant.

Blend
The mixture of different tobacco leaves that make up a cigar. It is the blend of filler leaves that gives the cigar its flavor and strength.

Cap
A small, round piece of wrapper leaf attached to the head of a cigar. The purpose of the cap is to secure the wrapper.

Cigar Band
The label that sits around the head of a cigar.

Claro
A a light, tan color cigar wrapper leaf. These are usually grown under shade tents where the leaves are picked before they mature, and are then quickly air-dryed. Claro wrappers are relatively neutral or mild in flavor.

Colorado
A medium-brown to brownish-red shade of wrapper leaf color. Usually shade-grown and characterized by a rich or strong flavor, with some being sweet and subtle aroma.

Corona
A thick cigar with a straight body.

Culebra
A cigar with a twisted or braided body.

Cubatabaco
Is short for “Empresa Cubana del Tabaco,” is the Cuban state tobacco monopoly. The company was formed in 1962, after the Cuban tobacco industry had been nationalized by Fidel Castro’s socialist government. Cubatabaco handled all production and distribution of Cuban tobacco products both locally and internationally until 1994, when the firm of Habanos S.A. was formed to export cigars and cigarettes worldwide.

Draw
The rate at which air is pulled through a lit cigar. A cigar’s draw should be smooth and easy. If it draws quickly and fills your mouth with hot rather than cool, tasty smoke, it is a poorly made cigar. Similarly, if the cigar is hard to draw on, or if it goes out two or three times before you’ve smoked a third of it, it has likely been wrapped too tightly

Fermenting
The aging of tobacco leaves.

Filler
The tobacco leaves that make up the body of a cigar. A combination of leaves from the top, middle and bottom of the tobacco plant are normally used for the filler.

Foot
The end of the cigar that you light. The foot of a cigar is usually pre-cut.

Handmade
A cigar bunched and rolled entirely by hand. Also known as Handrolled.

Head
The closed end of a cigar. The head of a handmade cigar must be clipped or cut about 1/16 to 1/8 of an inch down (about 2-3 millimeters) before the foot is lit.

Hot
A term used to describe a cigar that has a quick draw.

Humidor
A wooden box with built-in humidifier used to store, preserve and properly age cigars. Humidors are constructed of various types of woods, but the best interiors should always be lined with Spanish cedar (its natural oils prevent the cigars from drying out). Humidors can range in price from $100 to $5,000 or higher.

Lonsdale
A long cigar with medium to thick ring gauge.

Maduro
A wrapper color varying from a dark reddish-brown to very dark brown. The wrapper leaves have a very long fermentation period and can vary in taste from sweet through mellow, to strong earthly flavors with a mild aroma. These are primarily grown in Connecticut, Mexico, Nicaragua and Brazil.

Puro
A cigar whose ingredients: filler, binder and wrapper and grown in the same country.

Ring Gauge
The thickness, or diameter of a cigar.

Robusto
A short, thick cigar with a straight body.

Tunneling
The unpleasant occurrence of a cigar burning unevenly. To prevent tunneling, rotate your cigar occasionally while you are smoking it.

Vintage
Sometimes used to identify a cigar, vintage refers to the year the tobacco was harvested and not the year the cigar was made.

Wrapper
The tobacco leaf that is wrapped around the filler and binder of a cigar. A cigar’s wrapper should be perfect: no wrinkles, spots, veins or tears should be evident.

Aroma
The smell or the odor the cigar gives off when smoking it.