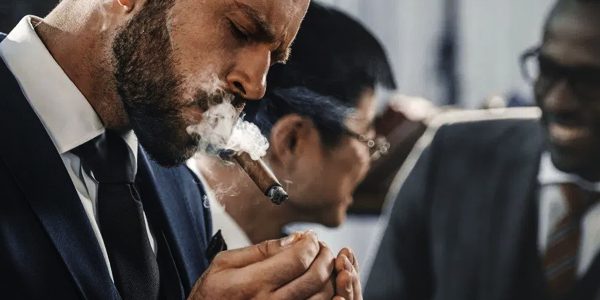 Here is a list of some cigar smoking etiquette

Don’t cut the end off of someone’s cigar without at least asking that person first. Most people prefer to do this themselves.

Never light a cigar with candles and regular matches that have a high sulfur content as these can also ruin the cigar flavors. Also, avoid using lighters that run on gasoline or lighter fluid because they give off a petrol-like order that can add an unpleasant flavor to the cigar.

The best lighters to use are butane lighters, which are odorless. There are also sulfur-free wooden matches that work great for cigar lighting.

While you are smoking the cigar, you should not flick the ash off the end of a cigar. The ash helps to keep the cigar burning at the correct temperature. When the ash looks as if it will fall off by itself, just set the end of the cigar over an ashtray and let the ashes fall off naturally.

Do not smoke a cigar as you would a cigarette. Cigar smoking is not supposed to be rushed and if you smoke quickly your cigar may overheat, which can ruin the taste. Cigars are meant to be a relaxing, calm smoking experience. Take your time, savor the taste and the aroma. One or two puffs per minute should be enough to enjoy the cigar and keep it lit.

Evaluating a cigar is similar to evaluating a glass of wine. To evaluate the flavor of a cigar, hold the smoke in your mouth for a few seconds (don’t inhale it into your lungs) and allow your tongue to savor the different taste sensations.

Be considerate of non-smokers. You should smoke only in designated smoking areas.

Label bands on or off? This has been a long standing debate that has no clear end in sight. Many will argue that leaving it on allows people to see what you’re smoking and if you are smoking an expensive cigar you are trying to show off your wealth. Others will argue that this is an old practice and removing it could risk a tear in the wrapper. There are many arguments to this debate. Read in or join our discussion by going to the forums.