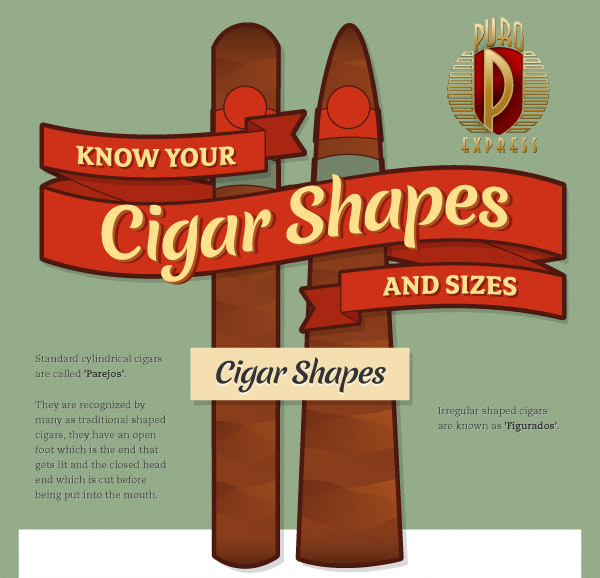 There are many different types of cigar sizes and cigar shapes available out there. It can be difficult to remember all the different cigar shapes & sizes being produced.

Traditional cigar shapes, or formats, vary greatly in size from brand to brand, so it’s important to describe cigars by their dimensions, which is by using length, diameter and using shape as well. Many cigar manufacturers from different parts of the world interpret cigar sizes in their own way.

The cigar ring size (cigar ring gauge) is the thickness, or diameter of a cigar. It is measured in 64ths of an inch. You can get an idea of the diameter of your cigar in inches by taking the ring size and dividing it by 64.

Cigar shapes are described as either a parejos (straight sided) or figurados (irregular shaped). From one of those two shapes, they are then designated with different names within one of those two type of shapes.

The most common cigar shape is the Parejo. They have a cylindrical body, straight sides, one open end (foot), other end that is closed off with a tobacco-leaf cap, which must be cut off before smoking.

Some of the most recognizable Parejo shapes are the Corona, Churchill, Double Corona, Lonsdale and Robusto.

Below is a list of some shapes that fall under the Parejos (straight sided) cigar category.

Although most cigars are Parejos (straight sided), there are also irregular shaped cigars which are called figurados. Figurados come in many different unique shapes and are usually a little more expensive because they are more difficult to roll.

The most common or recognizable Figurado shapes are the Belicoso, Perfecto, Pyramid, Presidente and Torpedo. Below is a list of the most common shapes that fall under the Figurado (irregular shapped) cigar category. 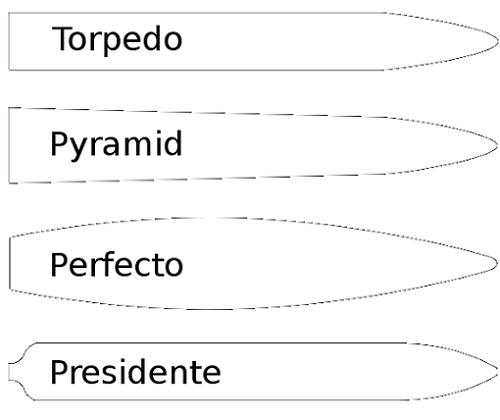 Torpedo
A torpedo has a closed foot, a pointed head, and a bulge in the middle.

A sharply tapered and closed headed cigar with a wider open foot. These cigars typically measure between 6 to 7 inches long with a ring gauge of around 40 at the head that widens to 52 to 54 at the foot.

Perfecto
The perfecto has a closed foot and a bulge in the middle. Perfectos can vary greatly in length from 4-1/2 to 9 inches, and a ring gauge between 38-48.

Presidente/Diademas
Shaped like a Parejo but considered a Figurado because of its enormous size and the foot can be open, or closes like a perfecto. Typically has a 50 ring gauge or larger.

Belicoso
Traditionally, a belicoso was a short pyramid, 5 or 5-1/2 inches long with a shorter, more rounded taper at the head and a ring gauge of 50 or less. Today, belicosos frequently look like coronas with a tapered head.

Culebras
Three long, pointed cigars braided together. The three parts are unbraided and smoked separately. They are usually 5 to 6 inches in length.

Note: The shape designation of a cigar does not mean a cigar is a certain size. The reason for that is when determined by a name such as corona or robusto, it is not a true universal standard.

For example, a corona sized cigar from one manufacturer can easily be considered a Churchill by a different manufacturer, even though both cigars measure the exact same length and ring gauge.

However, there are classic measurement for cigars that most cigar makers attempt to follow. When it comes to cigar sizes, the most important thing to remember is that cigars are categorized by length and ring gauge.

Have a look at our infographic on shapes and sizes: