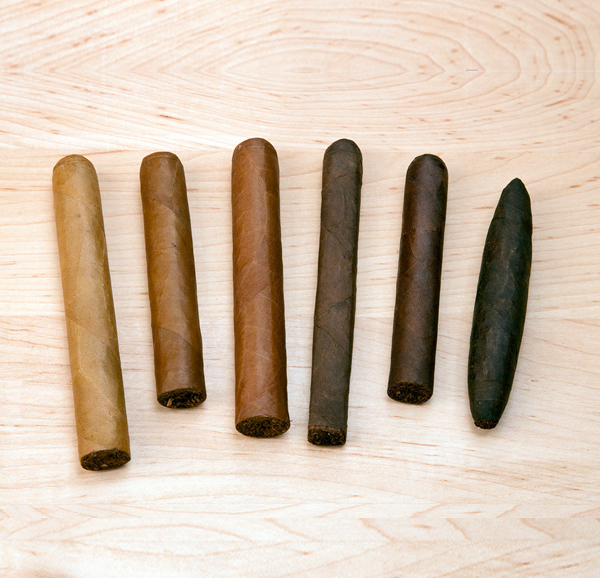 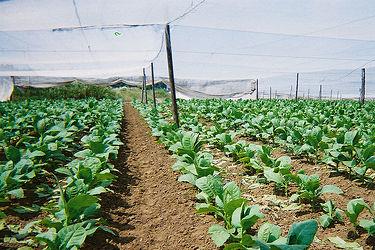 Along with the filler and the binder, the wrapper helps make up the cigar’s character and flavor. Although opinion varies about how much flavor the wrapper gives to the cigar. Depending on the type of tobacco used for the wrapper, it can provide a great deal amount of the flavor for a cigar.

Generally, darker cigar wrappers will tend to have a sweeter, fuller flavor, while wrappers lighter in color tend to be milder. But again, flavor does vary according to the blend of the filler.

Cigar wrappers come in a variety of colors. The variation in cigar wrapper color is a result of how the wrapper leaf is processed, as well as the color variations among different types of tobacco and the amount of sunlight a leaf is exposed to.

There are seven basic cigar wrapper colors, although there are many subtle shades among these basic colors. There are over 100 different cigar wrapper shades that are identified by manufacturers, but are broadly classified into seven main groups.

From light to dark, the seven commonly used cigar wrapper shades are listed below. 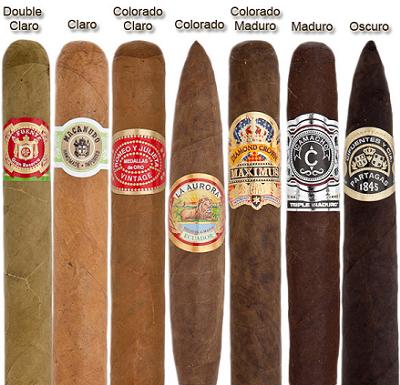 Double Claro
Also called Candela or American Market Selection. This is a very light, slightly greenish to yellow shade that is achieved by a heat-assisted fast drying process that retains the chlorophyll content of wrapper leaves. These wrappers have a very mild flavor and were once popular, but now have gone out of fashion.

Claro
A shade-grown tobacco that has a light, tan color wrapper. These are usually grown under shade tents where the leaves are picked before they mature, and are then quickly air-dryed. Claro wrappers are relatively neutral or mild in flavor.

Colorado
A medium-brown to brownish-red shade of wrapper leaf color. Usually shade-grown and characterized by a rich or strong flavor, with some being sweet and subtle aroma.

Colorado Maduro
Darker than a colorado and lighter than a maduro. The most notable wrapper in this color is the African wrapper from Cameroon. It is also grown in Honduras or Nicaragua from Cuban seed.

Maduro
A wrapper color varying from a dark reddish-brown to very dark brown. Maduro means “ripe” in Spanish, a reference to the longer process needed for this kind of cigar wrapper color. The wrapper leaves have a very long fermentation period or are either cooked in a pressure chamber. They can vary in taste from sweet through mellow, to strong earthly flavors with a mild aroma. These are primarily grown in Connecticut, Mexico, Nicaragua and Brazil.

Oscuro
Typically darker than the maduro color shade and is almost black. This wrapper is produced by leaving the wrapper leaves on the plant for a longer time. Only the leaves from the top part of the tobacco plant are used, which have had the most sun and are also fermented the for a longer period of time. This wrapper is sometimes called “black” or “negro” and mainly grown in Cuba, Nicaragua, Brazil, Mexico, and Connecticut, USA.

Tobacco plants that are grown for wrappers under a shaded tents or cloth tarps are called Shade Grown. These large tents diffuse the sunlight, giving a more uniform texture and smoother surface to the wrapper leaves. Sun Grown are tobacco plants grown directly in the sun and they are thicker with more veins. Shade grown leaves are lighter in color compared to Sun grown leaves which produce a darker wrapper.

Connecticut Shade
This claro wrapper leaf is one of the highest-quality wrapper leaves and is the most expensive in the industry. Its distinctive light, golden brown color is attained by growing it in the shade of huge tents in the Connecticut River Valley.

Connecticut Broadleaf
Also from the Connecticut River Valley, this maduro wrapper leaf is grown in the sun, which results in a darker and sweet wrapper.

Ecuadorian Shade Grown
The wrapper is grown in a region of Ecuador that receives consistent cloud cover throughout the growing season and is also said to be “Cloud-Grown.” This naturally diffused light produces a cigar wrapper with a silky texture and fine-veined structure, and creates a leaf with consistent color.

Cameroon Wrapper
This African country produces a sun-grown wrapper with rich flavors and sweet aromas. They are dark brown and can be found in popular cigar brands such as Arturo Fuente & others.
HABANA 2000 (H2000)

This is a newer wrapper made from Cuban Seed tobacco grown in Nicaragua.
Some words that describe a cigars flavor: spicy, sweet, peppery, salty, harsh, nutmeg, earthy, woody, cocoa, roasted, nutty, cedar, oak, fruity, leathery and much more. The range of cigar flavors goes on and on.