All you ever need to know about Cuaba Brand Cigars 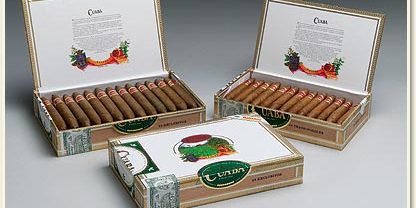 The president of Habanos SA, Francisco Linares officially launched the Cuaba brand of cigars on Nov. 19, 1996. The official launch was held in London, England at the Claridge Hotel. The brand was presented as the “perfect” line of cigars.

The Cuaba was launched as an effort to revive the figuardo shaped cigar. This style was very popular during the early twentieth century, but the demand began declining around the 1950s. As part of the launch party, Carlos Izquierdo Gonzalez, the creator of the revived cigar line, along with fourteen other extremely skilled cigar rollers (torcedores) presented a demonstration of how the figurado cigars are made.

Because they were all hand made without the use of a cigar mold, the original Cuaba cigars sold in the same box differed slightly in size. About a year later a mold was finally created to press the cigars into shape to make them all uniform. The early, non-molded cigars became very sought after by avid collectors. Collectors believed the non-uniform sizes gave the cigars more character, and made them really stand apart from other cigars produced. These cigars are not smoked, but stored and preserved, and especially cherished by the owners. Plus, coveted by collectors that were not able to secure a few for their collections.

Gonzalez claimed the blend of the Cuaba was inspired by the Montecristo, however cigar connoisseurs believe the flavor and the blend is more similar to the Romeo y Julieta brand cigars. Coincidentally, the majority of Cuaba cigars are produced in the Briones Montoto (manufacturer of the Romeo y Julieta cigars) factory.

The Cuaba was honored in 1998 by being chosen as one of the brands to be included as a special release vitola (the Distinguidos) in the unique ceramic jar humidor, the Millennium Reserve and has since been chosen several times for various special releases and included in humidor collections.

This is the list of commercially sold vitolas under the Cuaba brand.

Vitolas made by hand:

The Cuaba was chosen several times as part of a special release edition. Special releases of the Cuaba brand of cigars:

Whether you buy cigars to enjoy the wonderful flavor, to add to your cigar collection, there is the perfect Cuaba for you. The exquisite humidors add a great touch to your décor, and an interesting conversation piece. While the cigars put the perfect touch to the end of a marvelous meal, or add a delicate flavor to your night-cap.

The smoking experience may not be for everyone, but if you love the indulgence of a true Cuba, the smooth Cuaba brand of cigars is sure to fit the bill.