All you ever need to know about Fonseca Brand Cigars 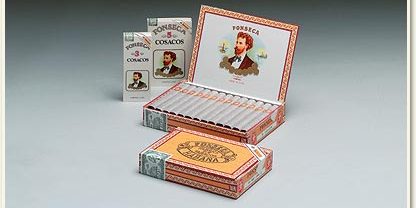 The Fonseca is a truly exquisite cigar. It is the only Cuban cigar that comes wrapped in a delicate, silk-like paper. Cigar aficionados believe that it is this superior wrapping that provides the cigar with the optimum humidity to maintain its glorious flavor. The wrapper also prevents the cigar from getting damaged.

Smokers marvel over the unique appearance of Fonseca brand cigars. The flavor is said to be mildly sweet with a romantic herbal aroma. It is considered the perfect beginner cigar, as it allows new smokers to become accustomed to cigars before trying the stronger types.

Don Francisco Fonseca, the son of Spanish immigrants, originally registered and trade marked the name Fonseca in 1907. In the early days, several different cigar factories in Havana produced the Fonseca brand cigars. Now, the Fonseca is mainly produced in a small town called Quivican, in the province of Havana, Cuba.

Although Don Francisco Fonseca and his wife Teresa moved to New York (where they raised their four children), he maintained control over his factory in Cuba, and made frequent trips there to supervise operations. His business stationary reflected his dual loyalties to Cuba and to the United States by featuring both the Morro, Havana and the Statue of Liberty, New York.

The Fonseca brand of cigars became popular quite quickly, partially due to the fact that the Don insisted on making his cigars unique by wrapping each one in delicate tissue paper and packaging them in tin tubes. Today, the cigars are still wrapped in the same way, although the tubes are made of aluminum instead of tin.

Francisco died suddenly of a heart attack in 1929 while on one of his trips to visit his factories in Havana. His wife Teresa took over operations, and ended up merging with G. Montero and T. Castaneda to create the company they named Castaneda, Montero, Fonseca SA.

Production continued without a glitch through the Cuban Revolution. Today, the factory Lazaro Pena in Quivican, Havana produces the Fonseca brand cigars. Compared to other Cuban cigars, the Fonseca brand is relatively inexpensive and its largest markets are in Spain and in Canada.

This is a list of commercially sold vitolas in the Fonseca line.

Fonseca Brand Cigars Made by Hand:

Discontinued Lines of the Fonseca Brand of Cigars:

In spite of the huge popularity of the Fonseca brand of cigars, availability was limited. Production was quite low compared to other Cuban brand cigars. The company only released two special edition cigars, long after the founder, who the cigars are named after, Don Francisco Fonseca died.

The first special edition release was the Fonseca No 4. It was a Regional Edition Series Release in Benelux in the year 2010. Each of the 1 600 cigars produced for this release were hand made and carefully wrapped in delicate tissue paper, as was the standard practice for Fonseca cigars. The cigars were packaged in Numbered Dress boxes of twenty-five cigars per box. The cigars used a standard “B” styled band.

The cigar chosen for this special regional release was the Fonseca No 4, measuring 5 inches long (127 mm) x 48 ring gauge. Officially the cigar was named Hermosos No 4 by the factory. Commonly cigar aficionados knew the cigar as the Corona Extra. This special edition was released in 2010.

The second special edition release was the Amateur. It was a Regional Edition Series Release in France in the year 2011. Each of the 4 000 cigars produced for this release were hand made and carefully wrapped in delicate tissue paper, as was the standard practice for Fonseca cigars. The cigars were packaged in Numbered Semi Boite Nature boxes of ten cigars per box. The cigars used a standard “B” styled band with a special regional edition band for France.

The cigar chosen for this special regional release was the Amateur, measuring 5.6 inches long (141 mm) x 50 ring gauge. Officially the cigar was named Gorditos by the factory. Commonly, cigar aficionados knew the cigar as the Robusto Extra. This special edition was released in 2011.

The Morro is an elaborate Spanish castle known as the Castillo de los Tres Reyes Magos del Morro. The picturesque fortress was created to guard the entrance to Havana bay in Havana, Cuba. The construction of the remarkable structure was commissioned to Juan Bautista Antonelli, an extremely skilled architect and engineer of Italian descent.

When the castle, which was named after the biblical Maji was built in 1589, Cuba was under the rule of Spain. Perched prominently across from the harbor, the magnificent fortress can be seen from miles around as it stands dominantly guarding the entrance to the port.

The Statue of Liberty is a United States national monument located in the states of New Jersey and New York, in a combination of Liberty Island and Ellis Island. The elaborate statue was a gift of friendship from the people of France to the United States and is known as a universal symbol of freedom and democracy. The Statue of Liberty was dedicated on October 28, 1886, designated as a National Monument in 1924 and restored for her centennial on July 4, 1986.