All you ever need to know about H. Upmann Brand Cigars 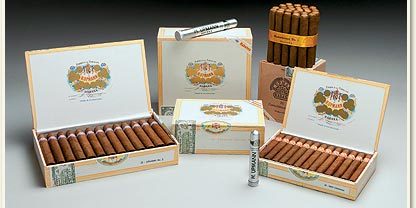 Cuban brand cigars are famous all over the world, and right at the top of the list among cigar aficionados is the H. Upmann brand which dates all the way back to 1844. One of the most famous moments in the life this cigar was in 1961, on the evening before the American declaration of the trade embargo. Reportedly, on this night the U.S. President John F. Kennedy asked Pierre Salinger, his press secretary at the time, to get him some Petit Upmanns.

In the United States, the Petie Upmann was sold under the Demi Tasse name. Supposedly, Salinger was told to procure every box of the cigars he could find from tobacco sellers all around Washington, DC. In total, he was able to obtain 1 200 cigars.

The premium H. Upmann is available in an extensive range of hand rolled and machine made vitolas and offers a flavor that is mild to medium in strength. It is one of the oldest cigars in the industry.

They are produced in two versions, one version is for the U.S. market and produced in La Romana in the Dominican Republic, because of the embargo, and the other is still produced by the tobacco company owned by the Cuban government for Habanos SA on the island of Cuba.

H. Upmann is one of the oldest brands of cigars still in existence. The brand dates back to the early to mid 1840s. It all started around 1840 with a German banker named Herman Upmann. Upmann opened a bank branch office in Havana, and began enjoying the flavor of the exquisite Cuban cigars. He also sent many of them home to friends and relatives in Europe.

It soon became clear to Upmann that this would be lucrative commercial opportunity, so in 1844 he invested in a factory that produced the cigars and the H. Upmann brand cigar was born.

It is traditionally believed that Upmann invented the idea of packaging the cigars in splendid cedar boxes as a convenient way to present them to customers. Before buying his own cigar factory in 1844, Upmann would label the cedar boxes with the H. Upmann name, even though they contained the cigars of another manufacturer. This practice established the Upmann name as a cigar distributor, and paved the way for the H. Upmann brand to become famous all over the world when he began producing his own cigars in the world renown H. Upmann Factory, in Havana, which was later renamed to the Jose Marti Factory.

Some people tell the beginnings of the cigar brand differently. Another version of the story has the nephews, Alberto and German, of the Upmann brothers founding the factory and associating the cigars with their new company.

By the late 1800s, the cigars produced under the H. Upmann brand had gained international recognition through presentations at various exhibitions. The brand won seven gold medals which today are still prominently displayed within the lithographed artwork on top of the H. Upmann cigar boxes, in addition to the original signature of Herman Upmann.

The Downfall and Re-emergence of the H. Upmann Brand

In 1922, the Upmann Bank and the H. Upmann cigar business both went bust. The bank failed because of speculation and poor investment decisions regarding German marks and Mexican oil properties. The cigar brand was bought by a British firm, called J. Frankau & Co. It continued producing the brand until 1935, at which time the company was sold again, this time to a new company called Menendez, Garcia y Cia Co., producers of the famous Montecristo brand.

This new group of owners continued to produce the H. Upmann brand cigars until the Cuban Revolution when the government nationalized the tobacco industry.

After the Cuban Revolution

Because of the nationalization of the tobacco industry, Menendez and Garcia moved production of the brand to the Canary Islands first, and then to the Dominican Republic. Due to the embargo on Cuban cigars, the brand is still produced there for the American market under the ownership of Altadis SA.

The original H. Upmann brand is still produced in Havana, in the original factory, now called the Jose Marti Factory. The Havana produced cigars still use premium tobacco from the lush plantations in the Vuelta Abajo region. H. Upmann cigars not produced in Cuba use the name H. Upmann 1844.

The Cuban version of the brand is widely popular all over the world. It is produced in a variety of totally hand made, long filler styles, hand finished versions and various machine made vitolas. Altadis SA bought a controlling interest in Habanaos SA in 2002. This brought about numerous changes to the H. Upmann line up.

The biggest change was eliminating more than thirty vitolas to weed out poor selling sizes. The Upmann line up was cluttered with a large array of redundant, poor selling sizes, that according to the company, had been slimmed down to only sixteen vitolas by 2006.

Habanos SA pulled a very uncharacteristic stunt in 2005 by releasing a new H. Upmann brand cigar vitola as part of their annual Limited Edition release. What made this move unusual was that the rule had always been that only the five marques globally distributed (Hoyo de Monterrey, Partagas, Romeo y Julieta, Montectristo and Cohiba) would be used for the Limited Edition release. The H. Upmann was a brand distributed locally.

The size of this limited edition H. Upmann was a large Magnum 50. The purpose of releasing this size was believed to be entice smokers who preferred the Magnum 46. Shortly after wards, the Quintero was reduced to local distribution status among Habanos, and the H. Upmann was elevated to the status of a globally distributed brand, with the cigars being exported to every nation where importation of Habanos cigars are accepted.

The line up of H. Upmann brands also includes two cigarillos made by machine known as the Purito and the Mini, as well as a brand of cigarettes produced under the direction of ICT.

This is a list of the commercially sold vitolas produced under the H. Upmann brand. The size of the cigar and the ring gauge is included in both Imperial and metric measurements.

As one of the oldest brands, the H. Upmann is also one of the most popular cigar brands in the world, enjoyed by wealthy cigar aficionados all over the globe.