All you ever need to know about Montecristo Brand Cigars 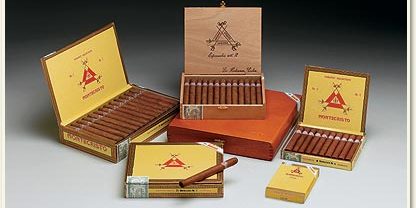 Montecristo brand of cigars are produced in Cuba by Habanos SA, the state owned tobacco company. However, cigars of the same name are also produced in the Dominican Republic by Altadis, the Franco-Spanish tobacco monopoly.

History of the Montecristo

Alonso Menendez bought the Particulares Factory in July of 1935. Although the Byron brand of cigars produced by the company was practically unknown, the Particulares brand had already attained quite a reputation. Immediately after acquiring the factory, Menendez created a new cigar brand and named it the Montecristo.

It’s not too difficult to figure out where the inspiration for the name came from – the Alexandre Dumas novel, The Count of Monte Cristo. Supposedly, this was a very popular novel chosen by the torcedores (cigar rollers) to have the lector read to them on the rolling floor. It is said that the rollers were largely illiterate, so the lector would read to them while they worked.

The Montecristo logo made up of a triangle of six swords bordering a delicate fleur-de-lis, now extremely famous, was designed by the brand’s British distributor, John Hunter Morris and Elkan Co. Ltd.

Along with a partner, Menendez founded a new firm in July of 1936. They named the company Menéndez, García y Cía. Success of the Montecristo brand continued to grow rapidly, prompting the firm to purchase the struggling H. Upmann Factory in 1937 from then owner, J. Frankau SA. Production of the Montecristo brand of cigars was transferred from Particulares to the H. Upmann factory, and remained there even after the Revolution.

Contrary to popular belief, the original name of the cigar was not H. Upmann Montecristo Selection. The fact that Menendez founded the company in 1935, but didn’t acquire H. Upmann until 1937 disproves this myth.

Through the efforts of the Alfred Dunhill company, the Montecristo brand of Cuban cigars became incredibly popular all over the world, and today still accounts for approximately one-quarter of the worldwide sales of Habanos SA cigars. This makes the Montecristo the most popular Cuban cigar in the whole world.

But, this wasn’t accomplished overnight. In 1961, when the Cuban Revolution was finally a thing of the past, the cigar industry became nationalized. This caused Menéndez and García to flee to the Canary Islands. Here, they attempted to re-established the brand. This didn’t work out as they were forced to give up the trademark due to disputes with Cubatabaco.

They moved the operation to the Dominican Republic town of La Romana in the mid-1970s and released the brand to US markets. Because the Cuban rights to the brand were not recognized here due to political embargoes, they were able to release the cigars to the US population. Today, Altadis owns and controls the marketing and distribution of Menéndez, García, y Cía in the United States.

The original line of Montecristo brand cigars only had five numbered sizes. The tubed cigar was added during the 1940s, but other than that, the line remained exactly the same until after nationalization. When Menendez and Garcia took off around 1959, Jose Manuel Gonzalez, one of the top grade cigar rollers was promoted to floor manager.

Gonzalez proceeded to breathe fresh life into the brand. During the 70s and 80s, the company introduced five new sizes: The Petit Tubo, the Joyita, the Especial No. 1 and the A. Three other sizes, called the Montecristo No. 6, No. 7, and B, were also launched but almost immediately discontinued, although you can still find the B occasionally when it is released in small numbers each year in Cuba.

Throughout the 70s and 80s, the Montecristo brand continued to gain popularity among cigar aficionados and firmly distinguished itself as one of the top selling Cuban cigar lines. The Montecristo No. 4 itself is the most popular cigar in the world.

Another new edition was added to the line in 2004. The large robusto was named Edmundo, after the hero Edmond Dantes in the famous Dumas story, The Count of Monte Cristo.

Montecristo cigars are regularly chosen as features in the Habanos SA special annual limited editions created with a dark, vintage wrapper. There are also many limited edition releases of the famous cigar for anniversaries, special occasions, charities and the annual Habanos Festival.

A special regional edition cigar was released in 2007 called the Edmundo Dantes Condo. It’s not known for sure, but popular belief is that the different name is due to trademark issues in Mexico. And in February 2009, a new lighter line introduced at the Habanos Festival. This new line was originally to be called Sport, but EU regulations prohibit the marketing of tobacco with any type of association to sports, so the name was changed to Open to reflect leisurely activities such as yachting and golf.

Montecristo brand cigars are mostly hand made, but the company does produce three machine made versions known as the Purito, the Club and the Mini.

Cigar aficionados often remark that the Montecristo No. 4 is an ideal cigar for first time smokers and the No. 2 is the highest standard by which the quality of all other cigars should be measured by.

This is a list of the commercially sold vitolas produced under the Montecristo brand. The size of the cigar and the ring gauge is included in both Imperial and metric measurements.

Vitolas that are Hand Made: