All you ever need to know about Quintero Brand Cigars 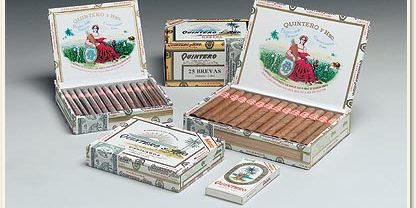 Along with his brothers, Augustin Quintero got involved in the tobacco industry during the 1920s. They made their humble beginnings in their Cuban hometown of Cienfuegos in the province of Las Villas. The strong flavor of the Quintero cigars coupled with the incredible low price, make it the perfect everyday cigar for Cuban cigar aficionados on a budget. The Quintero brand is one of the few cigars in the Habanos SA line which did not originate in the Cuban capital of Havana.

The company started production in 1924. It all began when Agustin Quintero, with the help of four of his brothers started a small factory, that they named Quintero y Hermanos, which means Quintero and Brothers. They opened the factory in their hometown of Cienfuegos, and started producing handmade cigars with tobacco grown in the nearby region of Vuelta Arriba.

Cienfuegos is located on the southern coast of Cuba, and near the Remedios tobacco growing region, which includes Vuelta Arriba, and not the world famous Vuelta Abajo, where most of the tobacco used in Cuban cigars comes from.

The Quintero tobacco blend quickly got the brand recognized as a true contender. It became successful commercially in Cuba as well as in the rest of the world. This success prompted the Quintero brothers to further develop their product line and introduce several new sizes of their cigars.

By the 1940s, the Quintero y Hermanos factory was able to increase their production and open a much larger rolling facility. The company moved production to Havana, and began using the premium tobacco grown in the pristine Vuelta Abajo region. Sales continued to grow exponentially. The Quintero brand was especially popular in Spain.

Fidel Castro brought about the nationalization of the tobacco industry in the early 1960s. This forced the Quintero brothers to all but abandon their tradition of only producing hand rolled cigars. The Habanos SA company repositioned the Quintero brand to primarily produce cigars made by machine, and most of the traditional hand made cigars were dropped from the line up.

This left mostly cigars made completely by machine and cigars partially made by machine and finished by hand using short filler tobacco. These new products were often sold in aluminum tubes, more commonly known as tubos.

For many years, the unique Quinteros brand was the only Cuban cigar made by machine that the Habanos SA company marketed globally. And as before the nationalization, Spain was still the largest consumer of the brand. What made the Quintero cigars so unique was the herbal flavor and sweet aftertaste not experienced with any other Cuban cigar. This is said to be due to the several additional months the cigars are allowed to age before being smoked.

It took a while, but the Habanos SA company finally realized, in 2002, that hand rolled cigars made a much better selling point that machine made versions – customers associated high end Cuban cigars with hand rolling. They changed their marketing strategy to promote premium products as totally hand made.

This, naturally meant that the cigars produced had to actually be made by hand. The entire Quintero line up was revamped, again. The company now offers premium cigars that are totalmente a mano (totally hand made)!

The Quintero brand cigars available today have a medium to full bodied strength, are all hand made and include either a short or medium blend of tobacco to make up the filler. Additionally, only top of the line tobacco is used from the Vuelta Abajo and Semi-Vuelta areas in the Cuban Pinar del Rio region.

The Quintero brand name is also used for a line of cigars not produced in Cuba. This version uses tobacco from Honduras and Nicaragua, and is marketed by the Habanos competitor, Altadis S.A. Ever since the embargoes set against products from Cuba, Altadis SA has been selling and promoting knock-offs of real Cuban cigars for consumers in the United States.

This is a list of the commercially sold Quintero vitolas.

Vitolas Made by Hand:

Discontinued cigars in the Quintero line up:

This special numbered humidor consisted of 2000 cigars. The collection was made up of 20 different brands. The temperature and humidity controlled humidor was produced to celebrate the millennium. Brands included in the special humidor:

This free-standing electronic humidor will not only enhance the superior taste of your cigars and keep them in a perfect smoking state, but add a lovely show piece to your décor.

The Quintero brothers still work hard to this day to produce exquisite cigars for smokers all over the world. You don’t have to be on a tight budget to indulge in the rich, full bodied flavor of a wonderful Quintero brand cigar.