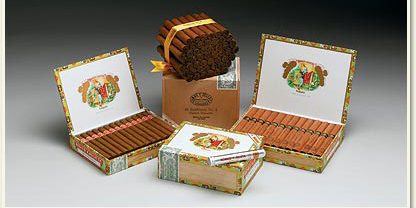 As with most of the Habanos brands of cigars, Romeo y Julieta cigars are authentically produced in Cuba using real Cuban tobacco from the pristine tobacco fields of the country, and in the Dominican Republic using tobacco from that country. This double production is largely due to the import embargoes preventing Cuban products from being sold in the United States. However, they are legally sold elsewhere in the world.

Developed in 1875, the Romeo y Julieta brand immediately showed its high quality and superior taste by winning several gold medals in four different universal expositions between 1885 and 1900. The cigar is named after the lovers in the William Shakespeare romantic tragedy, written around 1596. This cigar brand is traditionally believed to be the first one created in the “Churchill” shape in honor of Winston Churchill, the British statesman. This full-flavored Cuban cigar is one of the most famous and widely appreciated brand in the world today.

Inocencio Alverez and Manin Garcia introduced the Romeo y Julieta brand in 1875. The cigar brand is named for the doomed lovers in the famous Shakespeare tragedy, Romeo and Juliet. The gold medals on the band of the cigars signifies the numerous awards the brand has received at various tasting exhibitions.

However, the Romeo and Julieta brand didn’t truly gain recognition until after Jose “Pepin” Rodriguez Fernandez, the former driving force behind the Cabanas company in Havana, took over. He and his company, Rodriguez, Arguelles y Cia acquired the brand in 1903. Pepin was quite the world traveler, and spend much of his time visiting Europe and the Americas. On his travels, he actively promoted his cigars and entered his race horse, appropriately named Julieta, in all types of racing event around the globe.

All of his hard work paid off and the Romeo y Julieta cigar became outrageously popular all over the world. Many of his wealthy customers demanded to have the bands on their cigars personalized. At the height of this trend, the company produced as many as 2000 bands, personalized for various customers. During this time, the brand was also known for specializing in prominent cigars (figurado) such as the perfectos and the piramides. It is believed that over a thousand cigars in these shapes and sizes were in production.

Perhaps the biggest and most famous fan of this brand was Sir Winston Churchill. The flagship vitola Romeo y Julieta brand cigar is named in his honor – the 7 inch long by 47 ring gauge vitola known as the Churchill. The first female in the United States to serve as a state governor, Wyoming governor Nellie Tayloe Ross, was also known to smoke this cigar frequently.

After the death of Rodriguez in 1954, at the age of 88 years, the Cuban Revolution and the subsequent national take over of the tobacco industry, the Romeo y Julieta brand cigar was moved to the tobacco company in La Romana in the Dominican Republic. Under the direction of Altadis SA, the brand is still produced there to this day. The Cuban nationalized version of the Romeo y Julieta brand is still produced in Cuba. It is distributed worldwide, and is one of the biggest selling brands in the world.

A new addition was introduced to the regular Romeo y Julieta line up in 2006. The Short Churchill size, known as the Robusto, was unveiled in 2006 at the eighth annual Habanos Festival held every year in Havana, Cuba.

Along with the hand made cigars, Romeo y Julietas are also produced in three machine made versions known as the Puritos, the Clubs and the Minis.

This is a list of the commercially sold vitolas produced under the Romeo y Juleita brand of cigars. The size of the cigar and the ring gauge is included in both Imperial and metric measurements.

Unlike the tragic end to befall the couple the cigars are named after, the Romeo y Julieta cigars brand continues to enjoy a long life providing pleasure to smokers all over the world.

What are Ultra Premium Cigars
December 13, 2022