All you ever need to know about Trinidad Brand of Cigars 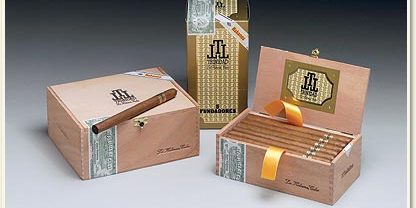 The Trinidad Fundadores has been exclusively produced for Fidel Castro since 1980 – so the story goes. For many years, the only boxes of the cigars that were allowed to leave Cuba were the ones presented to foreign diplomats as gifts.

The brand made its official launch as a Cuban export in February of 1998. By April of that year, the Trinidad brand became available in Canada. This cigar features one of the founders (fundadores). It is similar in size to the Cohiba Lancero.

The Trinidad is named after one of the most beautiful cities in Cuba, and is only produced in the El Laguito factory. Unlike most Cuban cigars, the Trinidad is packaged in quantities of 24. The newest addition to the line is the Robusto Extra, introduced in 2004. The cigar is full sized with the distinct flavor of the Trinidad blend of mildness and complexity. The Robusto Extra promises to be a true asset to the Trinidad line up, with one writer from the Cigar Aficionado magazine personally rating it as a 95.

According to former Habanos SA executive, Adriano Martínez, the Trinidad brand was originally produced at the Havana El Laguito factory in 1969.

After the Cigar Aficionado interview in the early 1990’s, the Trinidad brand cigar received quite a bit of attention. The subject of the interview was Avelino Lara. Lara was a former manager at the Havana El Laguito factory, and the main producer of the brand for the Graycliff Hotel in Nassau, Bahamas. A position he held until his untimely death on October 27, 2009.

In the 1992 interview, Avelino Lara stated that the cigars were an extremely exclusive brand produced only for Fidel Castro. Castro was the only person authorized to allow the cigars to leave the country, which he did when he presented the cigars as gifts to leading foreign dignitaries and diplomats. Lara also stated that the Trinidad cigars were made to a higher standard of quality than the famous Cohibas. Formerly, the Cohibas had been Fidel Castro’s favorite cigar and the one he choose to present to foreign diplomats and other exclusive presentations, prior to the mass market release of the brand in 1982.

After the release of the Cigar Aficionado interview, two very high profile individuals, with inside knowledge of the Trinidad and the entire cigar industry, contradicted statements made by Lara. The two individuals where none other than President Fidel Castro himself and the former Habanos SA executive, Avelino Matinez.

To clear up the contradicting statements, Cigar Aficionado conducted an interview with the President. When asked about the Trinidad brand of cigars, President Castro said that the Cohiba was the only brand he presented to diplomats as gifts. He reiterated this fact in his autobiography, claiming he knew very little about the Trinidad brand at all.

The Cigar Aficionado magazine hosted the extravagant Dinner of the Century in 1995, in Paris, France. The guests were treated to an array of rarities, including Trinidad cigars. Aside from those in elite diplomatic circles, these guests were the first to ever taste the elusive Trinidad.

The elusiveness did not last long, though. In February of 1998, the Trinidad brand of cigars was finally released to the general public. In a grand ceremony held in Havana, Cuba at the Habana Libre Hotel, one size of the brand, the Fundador was released for general consumption.

Martinez and other people closely associated with the brand claimed that the transition from being an elite gift for diplomats to being a mass produced product for the general public didn’t change the exquisite Trinidad tobacco blend, however the size of the cigar did change.

The executive diplomatic Trinidad cigars were only produced in one size, which was the same size as the Laguito No. 1. This was also the size of the Cohiba Lancero. But, the mass produced Fundador is made in a new size and given the factory name of Laguito Especial. The length is still the same as the the Laguito No. 1, however the ring gauge has been increased from 38 to 40.

Hunters and Frankau, importers for the United Kingdom cigar market, hosted a black tie event at the Hilton Park Lane in November 2003, in London England. The reason for this exclusive dinner was to showcase the debut of three additions to the elite Trinidad brand cigar line up: the Robusto Extra, The Reyes and the Coloniale.

Many cynics have claimed that the Trinidad brand was only created and released for export to attract cigar smokers from the United States who can only obtain Cuban cigars through unscrupulous methods, such as black market cigar sales.

This is a list of Trinidad brand of cigars made to be sold commercially. The length, gauge size, factory name and slang name is included.

Trinidad Vitolas made by hand:

The mystery and intrigue surrounding the brand is evidence that many more special edition Trinidad brand cigars will be produced. The renewed interest in this type of cigar has collectors closely monitoring new releases and limited editions to ensure they will be the first to grab a piece of history.