All you ever need to know about Bolivar Brand Cigars 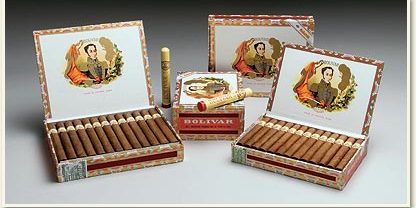 Bolivar is the brand name of two premium cigars, one of which is produced in Cuba by Habanos SA. Habanos SA is a tobacco company owned by the Cuban government. The brand is named after Simon Bolivar, the famous South American revolutionary who freed much of the continent from Spanish rule.

The Bolivar brand of cigars was developed in 1902 by Jose F. Rocha. The company was registered in Havana, Cuba in 1921, and currently has its headquarters at the heart of Havana in the Partagas factory.

The robust blend of the Bolivar matches the powerful might of the man the cigar was named after. It is one of the most full bodied, strongest cigar of all Habanos. The cigar boasts an unrivaled rich flavor due to the fabulous blend of tobacco from the Vuelta Abajo region. This blend makes the brand one of the most popular marques of experienced smokers.

When the Bolivar brand first began production, it produced the smallest cigar in the world called the Delgado. It measured just under two inches and had a gauge ring size of 20. A miniature box of the cigars were featured in the doll house of the Windsor Castle nursery.

That was a strange accessory for a child’s toy, but at the time people didn’t think about what a box of cigars in a doll house may imply. Today, that would probably be deemed inappropriate, but since at the time it was the home of the Queen of England, people probably didn’t make too much of a fuss.

The cigar company and the legal rights to the brand name were sold to Cifuentes y Cia in 1954, after the death of Jose F. Rocha. That was when production moved to the famous, historical Havana Partagas Factory. The factory is known today as the Francisco Perez German factory. Many of the most popular sizes are still produced there.

While the company was under the direction of Cifuentes, the Bolivar brand gained huge popularity in some of the biggest world markets and began to be exported all over the world.

The Cuban Bolivar is world renown among cigar aficionados as one of the strongest and most full flavored cigars in the world. Some of the most famous marques of the brand include Royal Corona, Petit Coronas, Coronas Junior and Belicosos Finos.

Altadis, a multinational purveyor and manufacturer of cigars, cigarettes and other tobacco products, bought a controlling interest in Habanos SA, the government owned Cuban cigar distributor, in 2002. This brought a number of changes in the way the cigars were produced.

One of the changes was to gradually change the production process of the various brands of Cuban produced cigars to be either made entirely by machine or entirely by hand. Historically, Bolivar had produced a variety of cigars made by hand, by machine or hand made and finished by machine.

The 2002 changes meant that several of the company’s vitolas had to be cut from the production line up. The only vitola to survive the cut was the cigarillo sized Chicos. Cigar aficionados are wondering and worrying that this size will eventually be cut from production, as well.

The Bolivar brand has been selected many times as special edition features and in special sizes in various regions around the world. One such incident was in 2004 when Wolters in Cologne, Germany ordered several thousand boxes of special cigars. The Habanos SA produced the special edition Bolivar Gold Medal exclusively for this shop. This special edition was actually a revival of a discontinued, older Bolivar size produced in the Cervantes (longsdale) format.

Half of the Gold Medal cigars were wrapped in gold colored foil and had a special Bolivar band around the middle of the cigar. They were packed in elite boxes of ten. Since this renewed interest in the Gold Metal, it has once again become a regular part of production.

This is a list of the commercially sold vitolas produced under the Bolivar brand. The size of the cigar and the ring gauge is included in both Imperial and metric measurements.

Vitolas that are Hand Made: