How to Light a Cigar 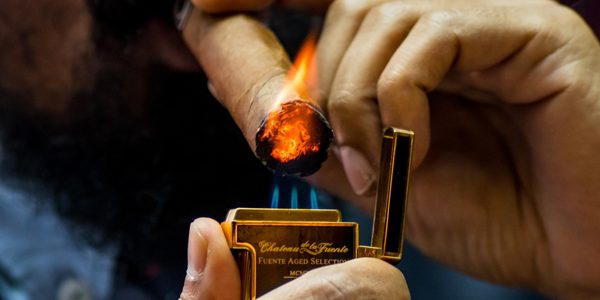 Once you have successfully cut the cigar, the next step is cigar lighting.

Cigar lighting is NOT like lighting a cigarette, it takes longer. The important thing about lighting a cigar is that the cigar must be evenly lit and is not contaminated by the source of the flame.

The best lighters to use are butane lighters, which are odorless. There are also sulfur-free wooden matches that work great for cigar lighting.

Avoid using lighters that run on gasoline or lighter fluid because they give off a petrol-like order that can ruin the flavors of the cigar. In addition, avoid candles and matches that have a high sulfur content as these can also ruin the cigar flavors.

If you don’t have sulfur-free match just use a wooden match and wait a few seconds for the sulfur to burn off before putting the flame on your cigar.

When lighting a cigar make sure you have a decent sized flame. Hold the cigar horizontally, with the tip of the flame just touching it. Then slowly revolve the cigar around until the end is evenly heated and avoid overheating the filler.

Then gently blow on the glowing end to ensure that it is burning evenly, if not put the flame on it again. Next put the cigar in your mouth, then draw slowly on the cigar, and the cigar should now be ready to smoke.

While you are smoking the cigar you should not knock the ash off the end of a cigar. The ash helps to keep the cigar burning at the correct temperature. When the ash looks as if it will fall off by itself, just set the end of the cigar over an ashtray and let the ashes fall off naturally.

If your cigar goes out while you are smoking it, as it might happen, tap away any ash, relight it as before, and resume smoking it. But beware that relighting a cigar after more than a couple of hours will almost certainly mean that its flavor is significantly impaired.

When to extinguish a cigar is entirely up to you. But a good guide will be in the taste. The shorter it becomes, the harsher the flavors because of the concentration of tars, which is a good indicator that you’ve had the best out of it and this typically happens about two-thirds of the way down.

How To Light A Cigar Video