Presentation of the Cuban Cigar 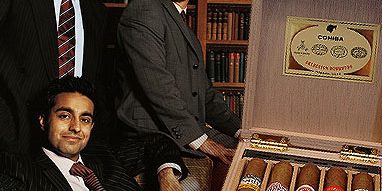 Once the cigar has gone through the entire production process all that is left is the final presentation. For a Cuban cigar, this is just as important as any other stage of the process. No other cigar on the planet takes as much care when it comes to proper presentation and packaging.

Cigars, based on the layers used for them, each have different color tones and hues to them. Accordingly, packers take great care to be sure that those packed in a particular box are all of the same color. There is not artificial coloring process used on Habanos, so there are going to be natural differences in the color because leaves from the upper part of the plant will be darker and darken even more throughout the process of fermentation.

The people who are the choosers of the packages, or those who do the direct packaging, have a great deal of experience as workers in the factory. They actually work in pairs of two so that both people can check and agree on the consistency of the color in each package. This system helps to insure that everything is packaged properly.

With over sixty different shades possible for coloring, the cigars are divided up by the choosers carefully. The second choose will then look through the batches the first has chosen by color. This person will sort out any differences he or she may find no matter how slight the difference may be. They then organize the box from dark to light, going left to right in the box.

It is then time for the all-important placing of the ring on the cigar. First introduced back in 1860 by Gustavo Bock, the ring has an important place in the history of the Cuban cigar and cigar culture. According to legend, the original intent of the ring was to prevent any stains from getting on the white gloves used while smoking a cigar. The ring has become an everlasting symbol among Habanos, one that is highly sought after by collectors around the world and one that is often imitated.

The Anilladora is the person who places the ring on the cigar. The ring is carefully placed on each cigar and then the cigar is placed carefully back in the box. Special care needs to be taken to place each cigar back in the order that was determined by the choosers. All the cigars are placed in the exact same way, with the ring facing up.

The classic cigar box is also something that originated in Cuba. Started in the nineteenth century, it is still the most popular way to pack Habanos. Some labels are put on the box before the box filled, while others are done after the fact. In either case, all the labels are placed by hand and each tag has its own specific name.