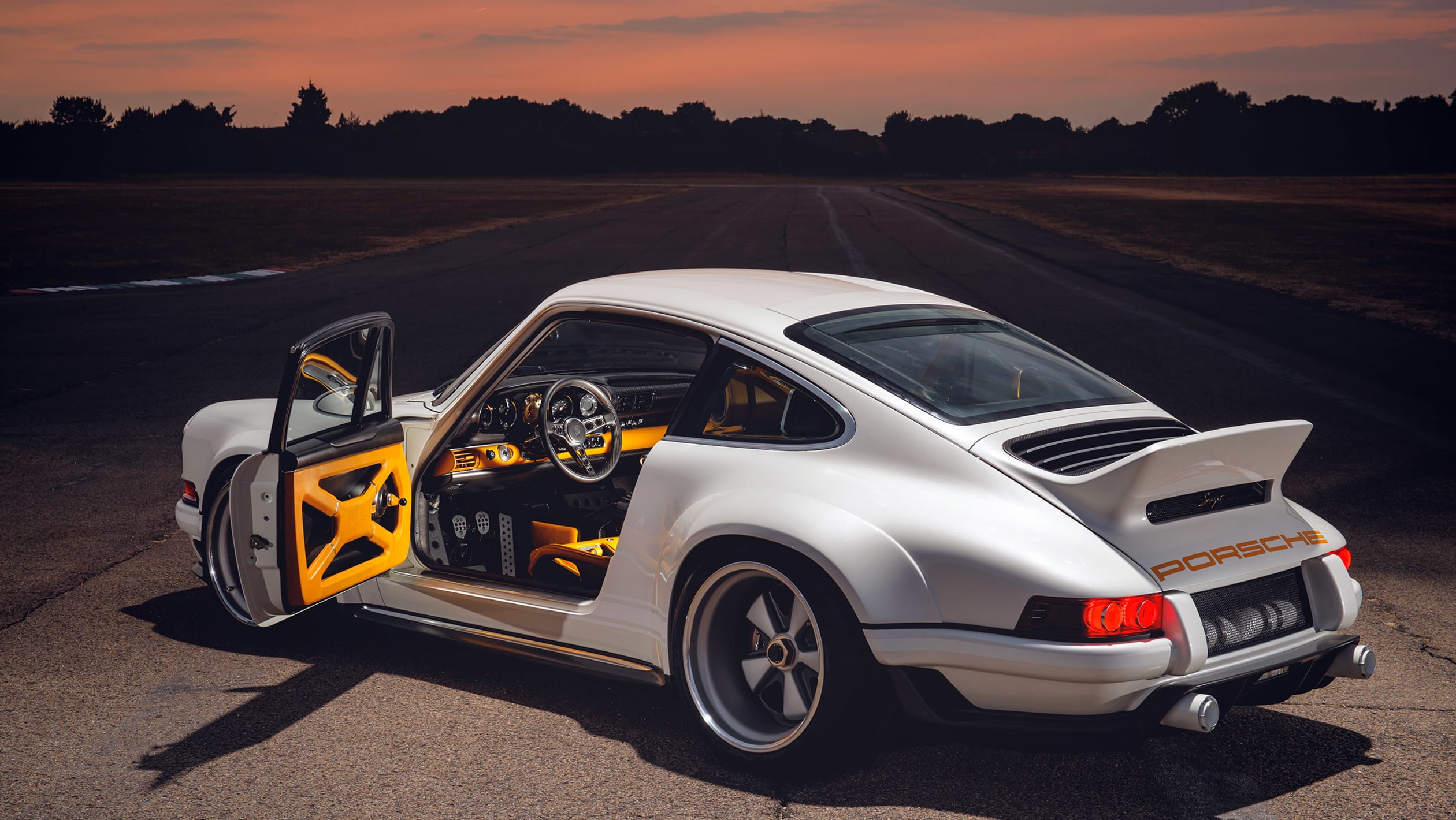 Some of us never quite get over our first loves, and mine was a heart-stopper from the 60s. She was cheeky and precocious, sporting luscious curves that were undeniably sexy yet adorable playful at the same time. Man, she could purr too. I didn’t think anyone or anything could ever live up to that first impression until she showed up again like a mirage at the 2018 Goodwood Festival of Speed. Clearly, she had had a lot of work done, but I didn’t mind. I fell head over heels in love all over again.

I’m, of course, talking about the Porsche 911, and more specifically, about the love child of Singer Vehicle Design and Williams Advanced Engineering. Rob Dickinson set out to create the ultimate lightweight, air-cooled version and to really do it properly. The ambitious dream collab took four years of obsessive, no-expense-spared dedication to thoroughly modernize the much-loved classic with a light enough touch not to lose her old school magic in the process. The resulting “Dynamics and Lightweighting Study” is simply a triumph.

It was a gamble messing with one of the most iconic cars ever created, but Rob Dickinson is a perfectionist and doesn’t dabble. Based in Los Angeles, CA, Singer has steadily built a reputation for restoring and modifying Porsche 911s, which Dickinson regularly refers to as the most important car ever designed. With nearly six decades of automotive advancements in the rearview mirror, Dickinson felt it was time to reinvent the wheel, figuratively as well as literally.

So he pulled together a grunty budget and impressive team to embark on his most ambitious 911 project to date. When he founded Singer Vehicle Design in 2009, the name was partially a nod to his roots as a musician. He also named his company as a tribute to Norbert Singer, the renowned Porsche engineer, whom Dickinson tapped to consult on the DLS project.

UK-based Williams Advanced Engineering, known for crafting winning Formula 1 cars, came on board as a major partner to completely revamp one of the most beloved sports cars ever built with Formula 1 technology from the tires up. Others have attempted their own versions of reimagining a classic but probably never quite the meticulous reworking both inside and out that this ambitious project takes on. The only other work of art that even comes close is the Alfa Romeo Disco Volante by Touring.

Singer and Williams elevate the 911 to a whole new level of drool-worthy. “Dynamics and Lightweighting Study,” as the name suggests, is a very limited-edition fine art collab that inspires bite-the-back-of-your-hand envy. The startling US$1.8m starting price to get your hands on one of only 75 in existence is further evidence that calling it a car is missing the point. It’s a magnificent kinetic sculpture that certainly wouldn’t look out of place on a pedestal in an art gallery if you can’t fathom taking it out on the open road.

Williams’ intensive development program included a complete aero study to make the most of every inch of the surface without sacrificing its signature shape. Therefore, removing the famous ducktail spoiler wasn’t an option, even if it was initially only a half-finished design concept that looked a lot better than it performed. Williams made it functional with an added chiseled channel in the roof and an integrated air bridge that now guides airflow down the rear screen to hit the ducktail squarely. A carbon front splitter and rear diffuser nimbly balance the downforce between the front and rear.

Williams also redesigned the front and rear suspension from scratch while maintaining the traditional trailing arm set up at the rear. The brake system incorporates Brembo CCM-R discs, as you’d find in a Bugatti Chiron.

Oh, and if all that wasn’t enough, during development, they also consulted with legendary Porsche veteran Hans Mezger, who designed Porsche’s engines for decades, to build arguably the world’s finest air-cooled engine to give it serious grunt. It now features a 4.0-liter beast with four-valve-per-cylinder heads and an innovative intake through openings in the side rear windows that can take revs to over 9,000 rpm. The all-new engine, visible through the rear mesh, is crafted in magnesium and carbon fiber to keep it ultralight. Reworking almost every part of the design in newer lightweight materials such as titanium, not available when the 911 was launched in the 60s, reduced its kerb weight to a lean 990kg that significantly boosted performance.

As if it wasn’t obvious everywhere you look, Dickinson etched his design mantra “everything is important” into the sill plaque. His impeccable good taste and unrelenting drive for perfection suffuses every detail, from the ceramic-coated titanium exhaust system usually reserved for LeMans racers to the bespoke center nuts on the rims. You won’t find any off-the-shelf solutions or standard parts, for that matter.

He pushed each supplier who was already producing the best in their class to up their game and bling it up without sacrificing performance. For instance, when Dickinson wanted to move the gear lever closer to the wheel but didn’t want to add extra weight, much to the delight of gear heads, they chose to leave the linkage exposed. The carbon fiber steering wheel is Momo, the six-speed manual is Hewland’s work, the custom seats from Recaro, and Michelin devised bespoke tyres with just the right curve in the sidewall to accentuate the BBS deep-dish 18-inch wheels.

I challenge those who try to argue that no car could ever justify a 6-figure ask to sidle up next to Singer’s 911 reboot and not have lustful thoughts.

You can’t underestimate the tug of nostalgia on the heartstrings or the wallet, especially when it’s backed up by daring innovation and the finest craftsmanship. There are not many car enthusiasts who would argue that the Porsche 911 was anything less than iconic from inception. That is until the Singer Williams version came along to redefine perfection.