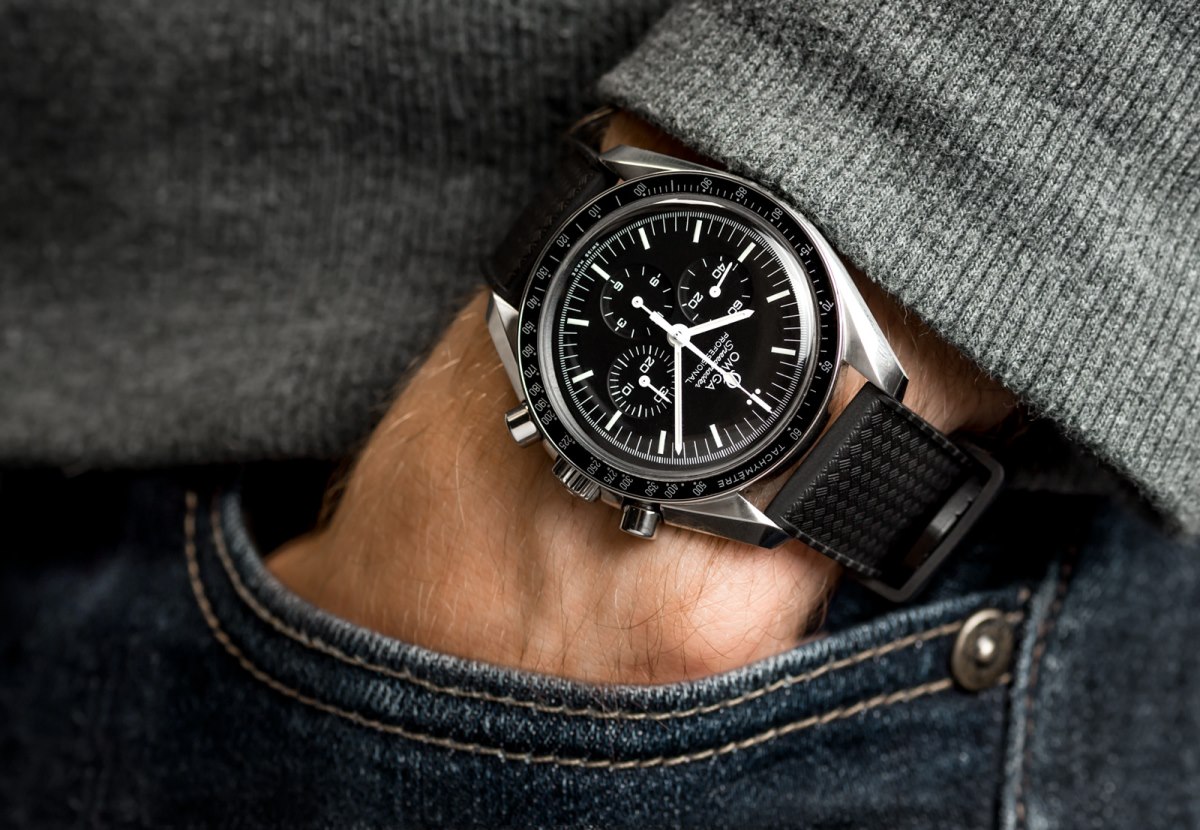 There’s a certain smugness to the ritual of wrapping an iconic timepiece around your tanned wrist. Perhaps because they should have been made virtually obsolete by those ubiquitous devices we all carry around in our pockets that do so much more than tell time. Ironically, classic vintage watches are even more in demand than ever these days.

But luxury was never for the purely practical. A mechanical marvel that is a wearable piece of art is timeless. Not to mention the allure of hunting for something rare and (nearly) unobtainable is irresistible for modern treasure hunters.

Two of the most distinctive and sought-after classic timepieces for the discerning gentleman are the Omega Speedmaster Professional “Moonwatch” and the Rolex “Paul Newman” Daytona. Being able to claim one of these announces you’re not only the kind of man that counts the seconds, but you make each second count.

Maybe you successfully buttered up one of only a handful of reputable dealers who might be able to procure such a find and maneuvered yourself to the top of their impossible waitlist. Or perhaps you had deep enough pockets to outbid all the other collectors at an international auction. Getting your hands on one of these treasures is no easy feat, and it’s easy to get swept up in the thrill of the hunt.

In the rarefied world of luxury timepieces, the Omega Speedmaster Professional Moonwatch is deliberately more understated than its more famous cousin, the vintage Rolex, which we’ll come back to a little later. “Speedys” are a little less conspicuous, which is perhaps why actors Tom Hanks and Bill Paxton are among celebrities who relish them.

Chronographs, aside from letting you know what time of day it is, also have subdials that function as stopwatches allowing you to stop, go, reset, and start the time again at a push of a button. Omega’s moonwatch features an elegant black and white dial with three small subdials surrounding the central hand. There’s a small seconds sub-dial, a 30-minute recorder, as well as a 12-hour recorder handy for a variety of tasks from working out average speed to calculating your heart rate.

Before they became the trendy luxury accessories of today, chronographs were marketed primarily as tools for specific markets and used by engineers, racers, athletes, technicians, and the like.  When Omega launched the Speedmaster in 1957, sports-oriented technical watches by any maker, not just Omega, were produced in very small quantities as chronographs would rarely be worn casually as an “everyday” watch until at least the 70s. Thus the jaw-dropping prices these specific vintage watches now command is due in part to how rare it is to find one of the few originals made that is still in good condition.

The moonwatch also appeals to adventurers at heart if not in action because of its fascinating history. The Speedmaster was the only timepiece to pass NASA’s rigorous testing to become the first watch to reach the moon. Then on the way back, it was credited with saving the astronauts’ lives. As the famous story goes, when an oxygen tank exploded during the Apollo 11 moon mission, it pushed the spacecraft off course and caused most of its instruments to fail. To get back on course, the astronauts used their Speedmasters to time the rocket boosters. They succeeded in getting home safely, earning the brand a well-earned footnote in space history and a place on all subsequent Apollo moon missions. While it has remained relatively unchanged since its debut, with a little TLC your moonwatch will endure making it a worthy companion on a Space X mission someday.

The classic manual-winding chronograph movement from Lemania, a close relative of the caliber worn on the moon, is housed inside a polished 42mm stainless steel case. Today, a new Moonwatch comes with a striking brushed steel bracelet and a more sporty NATO “astronaut” strap, as well as a tool to switch between the two. You also have several more choices of bracelets and leather bands if you feel like changing it up and adding more looks to your timepiece.

The built-in tachymeter (known initially as the Tacho-Productometer or TPM scale) also measures speed with a graduated scale. In the current model, it’s etched in white on the black bezel so you can read units per hour at a glance, such as kilometers per hour traveled over a 1,000-meter distance using the central seconds hand. Handy for timing your Tesla S Plaid+ for a few laps around a racetrack or your own personal best around the track. The most coveted vintage reference, the CK2915, featured a tachymeter scale on its stainless steel bezel. It was one of the early Speedmasters made only during the first three years of production. Although many later references are harder to tell apart, the 2915s also have quite a distinctive look due to its broad arrow hands. By 1959, Omega began producing the 2998, which many consider to be the archetype of the Speedmasters for the next five decades. Gone are the broad arrow hands replaced by alpha hands.

They are such a pleasure and honor to own; no one will blame you if you are reluctant to take it off. Luckily most Speedys have at least a 5-bar water resistance down to 50 meters or 167 feet, which means it should happily weather a shower or a few laps in the pool as long as you remember to keep the crown firmly pushed in.

One of the joys of owning a watch, especially one as well-crafted as the Speedmaster, is taking time to admire its mechanical finesse and multi-sensory pleasures. Press your ear up against it and listen to its steady rhythm that is as soothing as a heartbeat. Inside, the exquisite craftsmanship is far too ingenious to keep hidden away. If you’re purchasing one of the latest models, splash out on the Sapphire version, where a transparent sapphire crystal grants a delightful peek into the Rhodium-plated inner workings when you turn the watch over. It’s an excellent trick to have up your sleeve whether you’re hurtling blindly through space in a tin can or hit a lull in the conversation while stuck in an elevator.

Surprisingly for its hefty price tag, it’s a manual rather than an automatic caliber, one of the love-it-or-hate-it features of the Speedys. That means the moonwatch does require a gentle winding once a day. It has a 48-hour power reserve in case you forget occasionally, but ignore it for two days in a row and it’ll simply stop in its tracks. Couple the task with one of your established habits, such as brushing your teeth, and it should become second nature in a month or so. Another option is to turn it into a mindful daily ritual by taking a few deep breaths as you wind.

But if more is more for you, what you really need to do is get yourself a vintage Rolex. Not just any Rolex, though. Don’t settle for anything less than the best. It has to be a Rolex “Paul Newman” Daytona.

Now that watches are less of an essential tool and more of a luxury showpiece, wearing a vintage Rolex signals you’re an Alpha. It’s instantly recognizable, even for many who know next to nothing about watches. But for those who may know a thing or two about classic timepieces, almost all agree the “Paul Newman” Daytona is the ultimate prize, at least according to recent auction prices. However, you’re more likely to find a forgotten Picasso or a unicorn horn in your grandparent’s attic than you are of getting your hands on a verified, lovingly preserved Paul Newman Daytona. But that doesn’t stop collectors from sifting through the mountain of fakes in hopes of finding one.

Rolex launched their answer to the Speedmaster chronographs four years after Omega by targeting auto racing professionals and enthusiasts. They named it after Daytona Beach, Florida, as a nod to one of auto racing’s most prestigious races. The Daytona soon became a hit in the racing community as its tachymeter bezel made measuring average lap speed a breeze.

It was a work in progress, though. Rolex produced a few Daytonas with funky, multi-colored dials for each of the early references (6239, 6241, 6262, 6263, 6264, and 6265). The numerals on these dials were in an Art Deco style font, and the hashmarks sported a distinctive square at the ends. Aside from the dial style, the Daytonas were otherwise indistinguishable technically.

When they debuted, the ones with the “exotic dials” languished on the shelves compared to the more traditional looking Daytonas, so Rolex made very few. That was until actress Joanne Woodward bought one for her husband, Paul Newman.

But don’t forget that long before there were influencers with a capital “I,” there was Hollywood royalty. In the 80s, Italian retailers began circulating a portrait of Newman wearing a Rolex Daytona with one of these exotic dials. These Daytonas with special dials soon became known as “Paul Newmans” and skyrocketed in popularity.

Newman’s watch that he personally wore for 15 years set records at auction in 2017 when it sold for US$17.75 million, making it the most expensive Rolex in the world and cementing the “Paul Newman” Daytona’s reputation as the most highly coveted vintage timepieces. Sometimes art is too far ahead of its time and there isn’t always a logical or linear relationship between the current value of a work and its potential value. Vincent Van Gogh is said to have only managed to sell one of his paintings during his lifetime, but one of his paintings went on to sell at auction for US$82.5 million a century after his death.

Classic luxury timepieces have proven they indeed are timeless. That’s not just for vintage Daytonas. The waiting time to wear a “crown” like Michael Jordan or Jay Z and buy a brand new Rolex Cosmograph Daytona is about ten years, so don’t delay and go get yourself on that waiting list now.