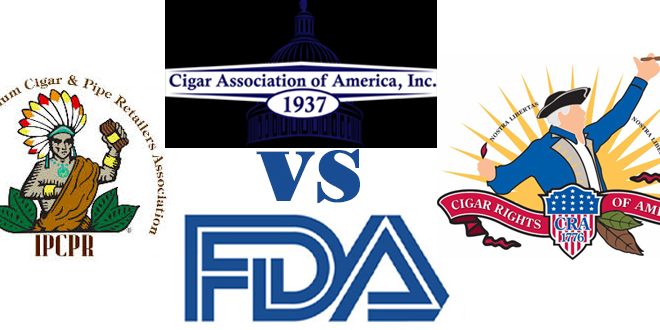 …to find out if the courts will side with the cigar industry to determine if the U.S. Food and Drug Administration’s tough new Final Deeming Rule will be overturned before the agency begins to enforce the new regulations. Last week, the District of Columbia U.S. District Court granted an extension to the U.S. Justice Department, who are representing the FDA. The trial is now set to begin on August 30.
Three major cigar and pipe industry lobby groups (Cigar Rights of America, Cigar Association of America and International Premium Cigar and Pipe Retailers) joined forces last July to file suit against the FDA. They claim that the Final Deeming Rule the agency announced would

The most controversial element of the FDA’s Final Deeming Rule, which went into effect on August 8 last year, requires any new tobacco products including

“products released after February 15, 2007, to be verified by the FDA before going to market.”

This rule means the FDA now require manufacturers to submit separate applications for product verification and government approval for each one of their products that qualify. It’s the cigar industry’s worst nightmare as the agency confirmed that as feared, the rigorous new process would likely “cost hundreds of thousands of dollars” per application.

to be made exempt from the FDA’s tough new rules brought out to regulate the entire U.S. tobacco industry on the grounds that these new regulations would cripple the cigar industry, which they claim is fundamentally different to cigarettes. Instead, the FDA chose to go with the more extreme of their two original options for the regulation, which they will apply to all tobacco products. So regardless of whether a manufacturer churns out millions of cigarettes with synthetic ingredients each year or several hundred cigars handmade from all natural materials, they are all required to comply.

The lobby groups filed a Motion

for Summary Judgement in February, hoping to avoid a long and costly court battle and get back to business. They argue that the FDA’s Final Deeming Rule imposes unreasonable demands that violate the First and Fifth Amendments and will unfairly threaten the livelihood of the cigar industry, particularly the smaller family-owned and boutique cigar manufacturers producing premium cigars.

It will simply be too costly

to comply with the new regulations for all but perhaps the largest cigarette manufacturers and the smaller cigar makers would soon have to put an end to new product development, which they say is critical to business, as well as having to cull dozens of successful product lines.

The clock is ticking,

and if the courts decide not to intervene, cigar manufacturers will only have two years to continue selling cigars released within the last ten years before the FDA says they will crack down. Products that have an application pending will be given an additional year to comply. In other words, your favourite cigars may begin to disappear from store shelves as early as August 2018.